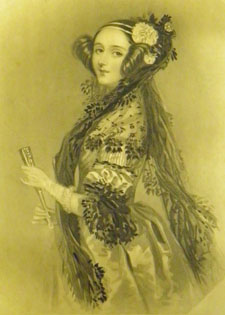 Augusta Ada King, Countess of Lovelace (1815-1852) daughter of Byron, now famous for writing a description of Charles Babbage's early mechanical general-purpose computer, the 'analytical engine'. She is regarded as the 'first programmer' because she wrote programs - manipulated symbols according to rules - for a machine that Babbage had not yet built. She also foresaw the capability of computers to go beyond mere calculating while others, including Babbage, only imagined on these capabilities.

From 1841 until her death, Ada lived at Sandown House in Esher, with her husband William King-Noel, Earl of Lovelace. Ada's mother also lived nearby, at Moore Place.

She died of uterine cancer aged 37, and at her own request was buried next to her father, Lord Byron, in the family vault at Newstead Abbey, Hucknall Torknard, near Nottingham.