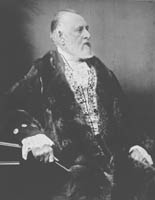 Benjamin Scott was born in London and followed his father into the Chamberlain of London's office as a junior clerk in 1827. He was elected as Chamberlain in 1858, a post which today would be referred to as Chief Executive. He continued in this office until his death. Scott's financial successes for the Corporation of the City of London were considerable. His management saved the Corporation much money, especially when the financial markets were shaky. He felt so much concern for the preservation of open spaces around London that he was directly involved in the acquisition of Epping Forest for the people of London.

Apart from his official duties throughout his life, Benjamin Scott maintained an interest and involvement in many things. He worked for the abolition of church rates and supported many educational projects. He persuaded the Editor of the Pall Mall Gazette to mount a publicity campaign to draw attention to the scandal of trafficking of girls for prostitution, eventually leading to the passing of the Criminal Law Amendment Act in 1885. Scott was a staunch nonconformist and contributed a large sum to the endowment of a nonconformist church in Southwark in memory of the Pilgrim Fathers.

Benjamin, his wife Kate and their three children moved to Weybridge in 1854 into a house built for them near the station, named Heath House (now called Lorimar House). The house belongs to the mid-19th century craze for Italianate architecture made fashionable by Queen Victoria at Osborne House, to the design brief of Prince Albert in 1845.

As a nonconformist Scott was concerned that there was no appropriate place of worship in Weybridge. He started to organise open air services, then evening services in his music room at Heath House. These services were attended by working people unable to attend morning worship because of their jobs. There was no evening service in the Parish Church. Such was the success of the services that a decision was made by Scott and several like-minded people to build a Congregational Church. A plot of land at the junction of Queens Road and York Road was bought by Scott, who also gave £500 towards the building cost. The church was dedicated in 1865. A school-room was built, also at Scott's expense, behind the church building. A British School was formed in 1871 and used this building during the week until it closed in 1907.

Scott was involved in several other local village matters including the Literary Institute founded in the 1860s, and he was a Trustee of Weybridge Poor's Lands. He was also a member of the Royal Astronomical Society, hence the observation tower on Heath House, and he gave weekly lectures, free, on a wide range of subjects.

Benjamin and Kate Scott moved to Notting Hill in the late 1870s and both died within a few days of each other as a result of an influenza outbreak in January 1892. They were buried in Weybridge Cemetery, remembered by many local people who appreciated how much they had given to the town.