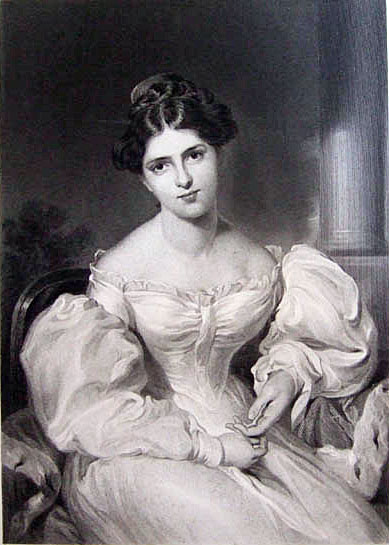 Fanny Kemble, described by novelist Henry James as having 'an incomparable abundance of being' was born into a flamboyant theatrical family on 27 November 1809 in Newman Street, London, not far from the Covent Garden Theatre which her father managed. Both parents, Charles and Maria Theresa Kemble were actors, as were her uncle John Philip Kemble and her aunt Sarah Siddons, one of the most famous English-speaking actresses. Fanny's formal education took place at schools in Bath, Boulogne and Paris but she learned much from voracious reading and from being part of a highly intelligent and disputatious family.
It was her mother's love of country life that brought the family to Weybridge. In 1825 she persuaded her husband to rent a cottage, Eastlands, in Brooklands Lane, from John Eastland acting on behalf of his brother Thomas, the nominal owner. They agreed to pay £4 4s per year and the family spent three summers there. Fanny's descriptions give us a glimpse of Weybridge before its transformation by the building of the London and Southampton Railway in 1838. Fanny first arrived in Weybridge riding outside the Public Stage wearing a splendid Leghorn hat, a present from her father. The journey from London would have taken between two to three hours depending on the state of the roads. In her Record of a Girlhood (1878) she described Weybridge as '.... The straggling little village..... [which] lay on the edge of a wild heath and common country.' She wrote that it was bordered on one side by the 'desolate domain of Portmore Park, with its mansion falling into ruin...and on the other the empty house and fine park of Oatlands...'. At this time Oatlands was used by Lord and Lady Ellesmere, friends of the Kembles so Fanny was a frequent visitor. She also remarked on the 'extensive and beautiful views' to be seen from the top of St. George's Hill.
Fanny loved Eastlands and the three summers she spent in Weybridge. 'We lived chiefly in the open air, on the heath, in the beautiful wood above the meadows of Brooklands.' She read, played cricket, went pistol shooting with her brother and wrote poetry. They created a circular open-air theatre in the front garden, which was where Fanny first performed as Juliet, the role that would bring her fame on the London stage (1829). Her father Charles Kemble visited at weekends, he was not enamoured of Eastlands, as he disliked the 'low lintels and narrow passages'. Catching smallpox, which disfigured her for life, marred Fanny's time in Weybridge and she regretted that they had not realised the necessity of topping up vaccinations. She came to Weybridge again in 1831 and in 1869 or 1870. By her later visits the town was barely thirty minutes from Waterloo by train, new streets and houses were extending up Heath Road and Oatlands had become quite a luxurious country hotel. Fanny described it as 'pleasant to all its visitors....' but regretted the loss of '...its lovely patio, [now] a nest of "villas" made into a suburb of London by the railroads which intersect the wild moorlands twenty miles from the city.' The rural idyll of her youth was fast being transformed by Victorian prosperity. Eastlands passed into the ownership of the Locke King family in 1860 and after the First World War it was purchased by the author Warwick Deeping; his widow bequeathed it to the National Trust in 1971, her portrait still hangs there. Eastlands is leased and not open to the public. 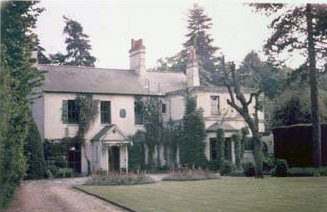 Fanny Kemble's last summer in Weybridge marked the end of her childhood: on 5 October 1829 she made her acting debut at Covent Garden Theatre playing Shakespeare's Juliet. She was nineteen years old and had never performed in public before. Her performances filled the theatre night after night; her deep resonant voice and graceful movement entranced audiences. Fanny's obituary in the New York Times (17 January 1893) recalled that her acting ' ..gave new lustre to the name of Kemble...'. Her own recollections of that performance go to the very heart of her craft, '...in....the balcony scene....for aught I knew I was Juliet, the passion I was uttering sending hot waves of blushes all over my neck and shoulders while the poetry sounded like music to me as I spoke it...'( quoted in, Death of Fanny Kemble, The Times (London),17 January 1893). She quickly added many more roles to her repertoire including Lady Macbeth, Portia, Beatrice and Julia in Sheridan Knowles' 'The Hunchback', which was written for her. Fanny was a star of the stage and of London society; she was intelligent and vivacious and could converse with anyone. She attracted many suitors one of whom, Augustus Craven, she became engaged to. Fanny was devastated when he ended their relationship. Following this disappointment, some cutting reviews and her family's financial problems, she and her father embarked on a two-year American tour. They made their debut at the Park Theatre in New York in September 1832 followed by the key cities of the eastern seaboard. The tour was a great success and the two Kembles were judged to be the first truly great actors to grace the American stage.
In Philadelphia, where they went straight after their triumph in New York, Fanny met and married the man who would change her life. Pierce Butler (1807-1867), the well-born heir to huge plantations in Georgia and North Carolina became a persistent suitor and they were married on 7 June 1834. Fanny willingly gave up acting as she had always intended to do. She gave birth to two daughters, Sarah in 1835 and Frances in 1838. Despite this the marriage was in trouble almost from the beginning; Fanny knew little of her husband beyond his good looks and charm and the Butler family was not impressed with Pierce's marriage to an actress.
She soon became fully aware of the source of her husband's wealth when the family spent almost four months (Winter-Spring, 1838-39) on his Georgian rice and cotton plantations. Fanny recorded her experience in 'Journal of a Residence on a Georgian Plantation' in 1838-1839, which was finally published in 1863 while civil war raged between the North and the Confederate states. She was horrified by what she saw. In the preface she described the reality of a slave's life as one of 'Scorn, derision, insult, menace - the handcuff, the lash - the tearing away of children from parents, of husbands from wives.........the labour of body, the despair of mind, the sickness of heart....'. Her husband's opposition had delayed publication and even in 1863 it was not published in the southern states. Fanny bore witness to the evil of slavery from first-hand experience and such a voice was invaluable to the Abolitionist cause.
Her condemnation of slavery widened the breach between her and her husband. They divorced in 1849 and she resumed her maiden name; she lost custody of her daughters and was not reunited with them until they were twenty-one. Fanny had visited Britain before her divorce taking up acting once again and in April 1848 gave her first solo public reading of a Shakespeare play. Once again she was a great success and made her living in this way for the next fifteen years touring England and America. However, she was probably most proud of her literary legacy: she wrote plays, poems, 'Notes on Some of Shakespeare's Plays' based on her solo readings and her vibrant autobiographical works of life on the plantations, 'Record of a Girlhood' (1878) and 'Records of Later Life' (1882), which document the history of her life and times. These were vividly written, swarming (Henry James' word) with people, criticism and opinion.
During her last three decades Fanny divided her time between America and England returning to London permanently in the late 1870s where she lived alternately with her daughters. She was once again a central figure in London society, the great friend of Henry James and an entertaining guest and hostess. She died peacefully, probably of a heart attack on 15 January 1893 at the home of her daughter Frances Leigh in Gloucester Place, London. She was buried in Kensal Green cemetery. Fanny had wished for a more spectacular end: to 'break my neck off the back of my horse at a full gallop on a fine day'. However, her life had certainly been lived at 'full gallop' - as a young luminary of the stage in 1830 she had ridden beside George Stephenson on the trial run of his steam engine 'The Rocket', she had lit up the stages of America and Britain with her performances, she had helped to expose the true evil of slavery, she had supped with Lord Byron and was on first name terms with Lord Tennyson. She had survived a disastrous marriage and divorce but had gone on to earn her own living again. Fanny had been an indomitable spirit who had lived life well beyond the limitations of her gender for a woman born in 1809.

The Economist, 21 June 2007, a review of Fanny Kemble, A Woman of Many Lives by Deirdre David