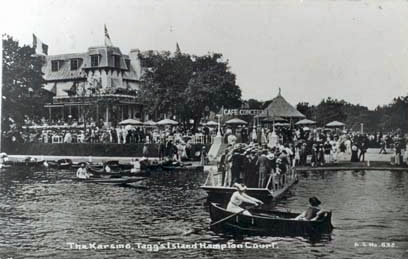 Sung to the hymn tune "The Church's One Foundation", the words of one of the most popular British troop songs of the 1914-1918 war were "We are Fred Karno's army, Fred Karno's infantry; we cannot fight; we cannot shoot, so what damn good are we". Fred Karno was well known for a chaotic and buffoonish style of comedy which resonated with the soldier's experiences of the disorganised nature of the war. He was also an ambitious and initially successful showbusiness entrepreneur whose fondness for the river at Molesey was to be his undoing.

Fred Karno was born Frederick John Westcott in Exeter on 26 March 1866. He was the eldest of seven children of John Westcott, a cabinet maker, and had only a limited formal education. In his spare time he trained as an acrobat and he moved to London where he performed as part of Karno's Trio from which he took his stage name. His particular talent was not as a performer but as an entrepreneur, spotting talented music hall artistes and training them to put on set pieces characterised by a physical and visual comedy based on acrobatics- "slapstick". Amongst the comedians he worked with were Charlie Chaplin, Stan Laurel, Flanagan and Allen and Max Miller.

Having visited Molesey at weekends early in his career to busk for the occupants on the boats at Molesey Lock, when Karno became successful he bought a houseboat, Highland Lassie, on Tagg's Island in 1903. There he threw parties and entertained a series of female lovers well away from his wife Edith whom he had married in 1889.

In 1913 Karno spent £20,000 on a new houseboat, Astoria, which he intended to be the biggest and most luxurious houseboat on the river. It was built at Brentford, its furnishings came from Maples and it had electric light, running water, a telephone and a sundeck which was 90 feet long and large enough for a full orchestra to play on it.

By the early twentieth century, Tagg's Island had itself become more than an anchorage for houseboats. The Tagg's Island Hotel, originally developed in the 1870s by Tom Tagg Junior, had helped make the island a popular pleasure resort. The hotel business became noticeably less successful after Tagg's death in 1889 and houseboat owners feared that if the hotel failed the island would be sold for redevelopment and their mooring leases would not be renewed. In December 1912 Karno himself took over the hotel and the island on a 42 year lease.

Karno employed the renowned theatre architect Frank Matcham to build "the first and most luxurious river hotel in Europe". As the site was confined and waterlogged, the innovative structure used concrete footings to support a steel framework with walls made of concrete slabs. Nicknamed "The Karsino", the hotel had 26 bedrooms with river views, lifts and electric lights. Its Palm Court had a maple dance floor and a ceiling painted with river scenes and could seat 800 people. The telephone number for the hotel was Molesey 1. The island itself was landscaped and there was a bandstand and sports facilities.

The redevelopment cost about £70,000 (about £4 million today). It opened in June 1913 and was successful for a brief period until the 1914-1918 War broke out in August 1914. During the war the hotel was a popular venue for entertaining wounded soldiers but the overseas visitors who it was designed to attract disappeared. After the war an economic downturn and changed public tastes further reduced its appeal.

At the same time, Karno's music hall business was adversely affected by the growth of cinema and wireless. He began to sell assets - including his houseboat Astoria- but was declared bankrupt in 1927. The Karsino was acquired by a variety of owners before being purchased by William Hurlock of AC Cars in Thames Ditton in 1941 who adapted the building into a factory for munitions and, later, cars. The hotel was demolished in 1971. In 1986 the Astoria was purchased by David Gilmour, guitarist with Pink Floyd and adapted as a floating recording studio.

After the death of his first wife, Karno married his long time mistress, Maria Theresa Laura Moore. He spent time in Hollywood where Hal Roach gave him a job and where he worked with Laurel and Hardy but the studio system did not suit his style and he returned to England. There, in about 1930, he created a new comedy troupe called Karno's Krazy Komics which was the inspiration for The Crazy Gang. He finally retired to Poole in Dorset where he ran a wine shop (possibly financed by Charlie Chaplin) until his death on 17 September 1941.