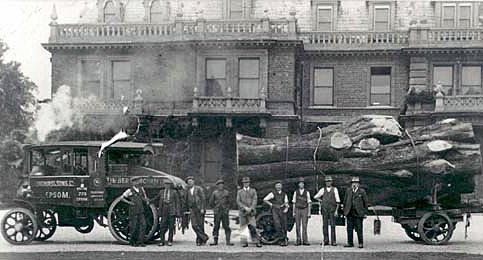 A Compliment to Cobham

In 1806, the highly respected Georgian aristocrat, business tycoon, politician and Lord Mayor of London Harvey Christian Combe chose the small Surrey village of Cobham for his country retreat. There, the opulence of Cobham Park - with its impressive mansion set amongst the tranquillity of lake, riverside and extensive farm land - provided a fitting residence until the end of his life. If it can be said that 'a man is known by the company he keeps', perhaps Cobham acquired by association at that time some of the character it retains today.

The original splendour of Cobham Park and what remains of it since his death may be regarded as the tangible legacy of HCC. It exists, however, as a mere reflection of far more significant achievements.

Here, at a formative time for Europe, Britain and British society, was a colourful character with a powerful personality leading a full, fascinating and influential life, both private and public. Mixing big business with high politics, personalities and sport as he did, had Harvey Christian Combe not existed, it is more than likely that some novelist of the period would have considered it necessary to invent him.

The son, grandson and great-grandson of wealthy lawyers in Hampshire, our subject may be described as having been born with a silver spoon in his mouth. A review of his life-time attainments in commerce, politics and on the social scene reveals just how much more was earned through his own prodigious energy and astuteness.

Harvey was his father's second son and sole heir (his elder brother Edmund having died unmarried when Harvey was 30). Perhaps as some disappointment to his father, young Harvey showed little interest in the profession with which the family had for so long been associated and for which it was respected. His mother's sister, however, had married a successful corn factor, Boyce Tree, whose business attracted Harvey to such an extent that he was ultimately taken into partnership by his uncle, later to become his only heir. There were other distractions luring Harvey away from a legal career toward commerce, in particular connections that his mother's family (the Jarmans) had in the sugar refining industry. It was largely as a result of these that Harvey's commercial reputation as a conspicuously successful brewer was to be established.

In May 1780 at the age of 28, Harvey married his cousin, Alice Tree, with whom he fathered four sons and six daughters, two other offspring having died in infancy. The responsibilities of such a substantial family must have concentrated the Combe mind on breadwinning and securing an appropriate social status. Whilst his early business in sugar-refining had proved highly remunerative, he was aware that the potential returns from brewing were yet more attractive. It has to be said that brewing as a trade during the period was considered a highly respectable practice, even if it could not be regarded as a 'profession' in the accepted sense. A commentator at the time (Badeau) had remarked, perceptively, that "great brewers nearly all attain to the aristocratic degree".

A further development recognised as a key opportunity by Harvey Combe was his association with one George Shum, for which he again had his mother largely to thank. Shum was another sugar-refiner, but immensely wealthy and, as a result, very well connected across many strands of polite society. Based in London, Harvey and George were to become lasting business partners and firm friends. Already popular within society, Harvey was at ease in moving amongst and being accepted within the elevated circles opened up for him by his friend. These included the Prince of Wales, Charles James Fox and Richard Sheridan. (It is perhaps of interest to note that, notwithstanding his well established professional status, penetration by Harvey's father into London society at such a level would have been impossible at the time, given his provincial status.)

Seven years on from his marriage, Harvey joined forces with George Shum to purchase The Wood Yard brewery in St. Martin-in-the-Field, London for £26,000 each, plus £23,000 from a Joseph Delafield. Delafield was an established brewer, formerly with Samuel Whitbread, who, the two principals recognised, would bring the required specialist skills to the new company.

The brewery had already become a reliably successful contender within the trade, enjoying a lucrative government contract to supply beer to the Navy. The Combe/Shum/Delafield take-over, however, coincided with significant growth in the domestic market. Home brewing was becoming less popular, as demand steadily increased for porter - a stronger, darker ale, which happened to be suitable for mass production. HCC reacted intuitively by investing in sophisticated new plant to provide the necessary extra capacity. Within ten years, the value of the brewery business had doubled. By his late 40s, Harvey was indisputably one of the top brewers in the country, with a personal profile to match. He went on to develop the company's success through organic growth and shrewd acquisition. Ultimately, a highly beneficial merger with former competitors and associates of similar standing within the industry was completed to form Watney Combe Reid. In terms of personal reputation, Combe was respected as much for his integrity and common courtesy at all levels as for his commercial attributes. Harvey Christian's strength of character, interpersonal skills, ability to heed danger and respond to opportunity in business were to be reflected in no smaller measure throughout a parallel political career.

With political ambitions firmly established as part of a commitment to parliamentary and social change under William Pitt, Combe was elected MP for the City of London. However, as an outspoken member of the opposition Whig Party, aligning himself with prominent reformists such as Charles Fox and fellow brewer Samuel Whitbread, he may for a time have stunted his political development. Having been passed over six times, by 1799 he had finally made it to become Lord Mayor of London - a major honour and personal triumph. The event was recorded for posterity by a portrait, depicting him proudly in his robes, by the eminent artist John Opie, RA, who became a close friend. In 1805, as a personality within the brewing industry, as well as on other stages, our man - already Sheriff of London and Middlesex and a Governor of the Irish Society - added the post of Master of The Brewing Company to his attainments.

Combe certainly brought some style, colour and zeal to the office of Lord Mayor, applying actions as well as oratory to his beliefs. Among several issues which particularly concerned him were the Irish situation (he opposed union), an end to the slave trade, the establishment of a national education system and Pitt's foreign policy, which he challenged publicly as 'this disastrous, abhorrent war (with France)'. Such vehemence not surprisingly attracted attacks by opponents, occasionally vitriolic, to discredit him. He is reported to have said of himself, with typical candour, that he 'claimed to be attached personally to no man, nor to have any prejudice against any members of the administration'. There were also those in parliamentary circles who, despite opposite leanings, themselves acknowledged his irrefutable qualities. A diary entry by Farington described Combe as a man "who has been found to possess a very warm heart and great kindness... He is always ready to do acts of service when applied to and engages by his manner. His connection with the City has been attended by great expense to him, and he has had honour from it but not profit. In politics he is a party man, but the City have confidence in him when business is to be transacted."

Toward the end of his time as Lord Mayor, when invasion by France seemed likely, HCC became Captain of the Aldgate Volunteers and subsequently Colonel of the Loyal London Volunteers for six years. In 1806 he narrowly missed a knighthood from George III, possibly because of his unsympathetic political stance.

As will have become apparent, it is impossible to separate the fascination of the character of the man Harvey Christian Combe from the impressiveness of his achievements.

He was large in stature and vested with substantial physical courage. As a young man, he once informed his father in some detail of how he had successfully overcome an armed highwayman set on robbing him and a colleague whilst travelling in a coach near Clapham. In 1803, he demonstrated his fearlessness and 'common touch' to much acclaim when, to avert a riot, he pacified an angry and hungry mob protesting against food shortages.

Harvey was an active sportsman, fond of boxing, in which he was a willing participant as well as a keen spectator (an activity criticised by some at the time as unseemly for a gentlemen of a certain status). His political opponents are on record as attempting to discredit him as a 'pugilist'. Harvey was a regular race-goer, too, having been described in one obituary as 'equally well known at Newmarket as the ring-side'. He was no stranger to the card table, either, being renowned as a Whist player and shrewd gambler. It is even suggested that some of his business acquisitions in the way of 'tied houses' were won through his prowess at cards.

This extraordinary roundness of character, association with success and pleasing disposition resulted in HCC being held in high esteem by many famous individuals of his day. He was to be seen in many of the best clubs and similar fashionable places with all the right people. He was well liked by royalty, to an extent that he held an annual 'Brewhouse Dinner of Beefsteaks' in their honour, on his Cobham Park estate.

Harvey Christian Combe's last recorded Parliamentary speech was delivered in 1814, two years after the onset of an illness that had partially paralysed him. His final formal appointment was as MP for the Chiltern Hundreds. Having purchased Cobham Park eight years earlier, he spent one year there after his retirement, before passing away on July 4th 1818. He was 66 years old and had been suffering from the effects of a stroke for a year. A generous benefactor to various causes throughout his life, he left an estate, including Cobham Park, worth some £140,000 to his family.

Social analysts in the nineteenth century and since may have debated whether a brewer can also be a gentleman. Harvey Christian Combe would seem to have closed the argument. It would be naïve to assume, however, that in the worlds of big business and astringent politics there would not have had to be some ruthlessness on the part of our hero. A modicum of satisfaction may perhaps be permitted, however, in that arguably one of our most conspicuously successful and endearing public figures - a man of his time if ever there was one - should have added his credentials to enrich those of Elmbridge.

Harvey predeceased his wife by 10 years. In 1828, Alice was laid to rest beside her husband in an imposing family mausoleum still to be seen in the churchyard of St Andrews, Cobham. 126 years after the death of Harvey Christian Combe, Cobham still can count a direct descendant of his family amongst its residents.

I gratefully acknowledge the fine work of local historian David Taylor in respect of the Combe family and Cobham Park and am particularly grateful for his generosity in allowing me access to it. I recognise his diligence in sourcing the facts (detailed in his own published works, including 'An Estate for All Seasons') and his all round professionalism, without which this truncated account would not have been possible.