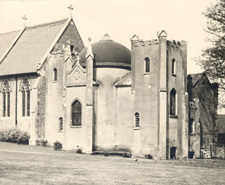 James Taylor [of Islington] (1765-1846), architect and builder. James Taylor built St Charles Borromeo Chapel and the adjacent Waterloo House [later renamed Waverley House]. Shortly after the second Catholic Relief Act of 1791 Taylor designed 'The London Road Chapel' in Southwark in 1791-3, which later became St George's Cathedral. Because many of the elderly, injured, and sick Catholic seamen at the Royal Hospital for Seamen in Greenwich could not make the journey to Southwark, Taylor also built a chapel in the grounds of his house, 'Park Place' in Greenwich in 1792. In 1800 Taylor designed and built St Edmund's College at Old Hall Green, near Ware in Hertfordshire. His sons were educated there gratis. Taylor also designed the Catholic college at Ushaw in County Durham.