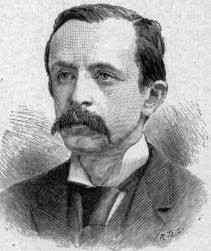 Born in May 1860 in Kirriemuir, Forfarshire Scotland.
Barrie was the ninth of ten children and suffered from Psychogenic Dwarfism, measuring just four feet ten inches high. This disorder occurs between the ages of two and fifteen and is said to be brought on by extreme emotional deprivation or stress. The condition blocks the growth hormone in the pituitary gland.

Father was David who was a handloom weaver earning a stable but minimal income.
Mother was Margaret Ogilvy who was known for her love of literature and her ambitious nature.

During Barrie's first six years he lived in the shadow of his mother's all consuming love for his older brother, David. When David was fourteen years old he died from injuries after a skating accident though there is some mention in some biographies that David had a "bump on the head" before he fell. His mother was devastated and the only way she could console herself was to believe, "David would remain young forever." Barrie drew inspiration from this thought.

Desperate to be loved and to replace David in his mother's life he copied his brother's mannerisms and never left his mother's side, showering her with attention. The two became very close and she became his ideal mother figure who he adored and consequently immortalised her as Wendy the mother figure in Peter Pan. Margaret was always physically frail and although she lived until she was seventy-six she was bedridden for many years with what is described as a wasting disease.

The notion of everlasting childhood stayed with Barrie and became the defining reason for his great love of children and the theme of his work, "Peter Pan" even though it would be thirty-three years before the play would open on stage. But in Barrie's mind this seed was sewn when he was six years old.
Barrie graduated from Edinburgh University in 1882 and worked as a journalist writing critical reviews of theatrical plays. His first novel was "Better Dead" in 1887 followed by more successful novels and began making a name for himself.

He married Mary Ansell, an actress in 1894 and though the couple did not produce any children of their own they had many child friends and held parties for them. One particular girl whom he liked used to have a lisp and called him "My Fwendy" which then became his character name for Wendy in his play. They also had a huge St Bernard dog called Porthos who they were devoted to. He then started to write comedy plays and the first one was "Walker London" which made much fun of the institution of marriage. Neither he nor Mary were happy in their own marriage and divorced.

Barrie took to taking long walks in Kensington Gardens where he met the LLewelyn Davies family in the late 1890's. He became great friends with them but in particular with the mother and the three sons, George, Michael and Peter. He visited them often and became Uncle Jack to the boys. He continued to write more plays and books and it was in his book "The Little White Bird" in 1902 that the character of Peter Pan first appeared.
While admitting his favourite writer was Jules Verne, Barrie in turn was being greatly honoured and admired by other such writers as H.G. Wells, George Bernard Shaw, Thomas Hardy and Robert Louis Stevenson. He was also very friendly with Sir Arthur Conan Doyle who played many a cricket match with him. He lived for some time on a house boat on the Thames in Long Ditton near Taggs Island.

"Peter and Wendy" the play was staged in 1911 and the critics raved. It was his perfect creation and was the crowning glory of many other plays he wrote dealing with his anti-establishment views. His statement was that "Neverland" was a world free of Victorian social constraints and a world where sexuality and morality are crucially ambivalent. From this point of view the metaphorical cast of "Peter Pan" is as follows.

Barrie also wrote the well known play "The Admirable Crichton" in 1902 which analysed the class structure of Edwardian society. Gender roles and restrictions are also skilfully satirised in Barrie's excellent and neglected play, "What Every Woman Knows" written in 1908.
When the Llewelyn Davies' parents both died in short succession of each other, Barrie was heartbroken but followed through with his promise to foster the three boys and see to their upbringing. After one year he legally adopted George, Peter and Michael.

Barrie was knighted in 1913 and became the rector of St. Andrew's University where he gave his famous address on "Courage." He received the Order of Merit in 1922 and became the President of the Society of Authors in 1928.

Barrie had his critics who labelled him impotent and a lover of young boys, and that the innocent storyline of the present day pantomimes are far removed from his original book which these same critics saw had a dark and more sinister side, as though from a disturbed mind.

However, it is imperative to argue that the following quotes, rather than emerging from a disturbed and sinister mind, are produced by a childlike innocence of a man who revelled in the simplicity and humour of a child's literal interpretation of the world and the life contained within it.

Barrie died in London in 1937 and is buried in Kirriemuir, Scotland in the family plot. The land now belongs to, and is protected by the National Trust. In 1929 he left the copyright deeds of the play and book "Peter Pan" to Great Ormond Street Hospital, and this was made permanent and lasting in his will. This was his gift to children that would continue through many ages. 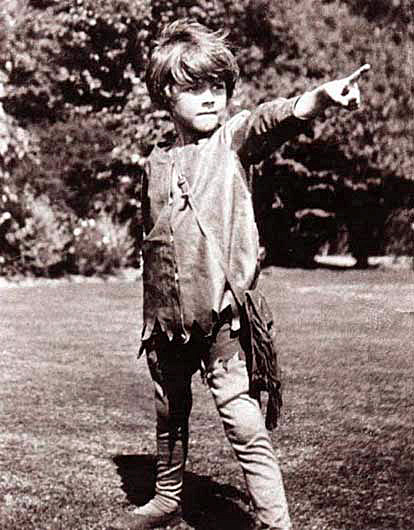 A note on what happened to his three adopted sons

George was killed in the trenches in 1915.

Michael drowned at the age of twenty at Oxford University in 1921.

Peter was awarded the Military Cross in the first war. He founded the publishing house named Peter Davies Ltd. In 1926.
All his life he was always associated with the character of Peter Pan which he loathed but could not escape from. This, plus his debilitating emphysema and the cruel Huntington's Disease suffered by his two sons, drove him to suicide on the 5th April 1960 aged sixty-three. He threw himself under a train at Sloane Street, London.

According to UK law, any bequeathed royalties become defunct fifty years after the person has died. Since Barrie died in 1960 the royalties were due to cease in 2010, however the Government made a unique law charging that the royalties from any source of "Peter Pan" are to be continued for an indefinite period to the recipient who is the Great Ormond Street Hospital for children.