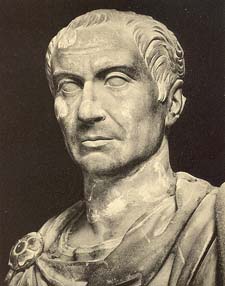 It is possible that Caesar visited Elmbridge in 54 BC, during his Second Invasion of Britain. Accounts of the invasion are recorded by Caesar himself in his 'Commentaries on the Gallic Wars', and also briefly in 'Agricola' - a biography of a Governor of Britain by the contemporary historian Tacitus. Caesar landed in England (probably at Deal), accompanied by five legions and 2000 Gallic cavalry, and fought his way across country, closely pursued by British tribes. The crucial battle for the Romans lay on the banks of the Thames, but the exact location is uncertain - tantalisingly, Caesar left this point out of his account. Geographical information from primary sources is too sketchy to prove conclusively that Caesar came to Elmbridge, although the question has been hotly debated across the centuries.

Local legend has it that Caesar crossed the Thames at Cowey Sale, just upstream from where Walton Bridge now stands. Here Caesar encountered Cassivellaunus, King of the British Catuvellauni tribe, who defended the opposite bank with a breastwork of stakes. The Anglo-Saxon historian Bede described these stakes in 8th century AD as 'formed of the entire bodies of young oak trees. Wood so hardened as to resemble ebony - could be polished. Each about 6 foot long. Stood in 2 rows as if going across river. 9ft apart as water runs, 4 ft apart crossing the river.' ('Historia ecclesiastica', Chapter 2). The presence of these stakes at Walton was taken as evidence that Julius Caesar had passed through Elmbridge. Further support was added by Caesar's own report that 'The river was passable on foot only at one place and that with difficulty' ('Commentaries on the Gallic War's, Chapter 18). Apparently Walton and Brentford were the only places where the Thames could be forded.

Over the centuries the 'Cowey Stakes' theory was passed down and romanticised. William Camden wrote in his history of Britain: 'I am on the banks of the River Thames. Perhaps the great Caesar crossed at this place' ('Britannia'). Daniel Defoe also mentions it in his 'Tour Through England and Wales'. However, more recent scrutiny has raised several objections to the theory. Eric Gardner (Curator of Elmbridge 1909 - 1951) noted that the river bed at Walton has moved steadily north over the years, so that its current position does not reflect the river path in Roman times. Furthermore, when some of the 'Cowey Stakes' were dredged up in 1750, they were found to run across the River, rather than lining the bank in a defensive fashion. This suggests that the stakes were either arranged in Anglo-Saxon times to form a passageway for cattle to swim through, or were the footings for a medieval bridge for cattle to walk over (Elmbridge Museum, MSS). This would explain the origin of the name 'Cowey' as 'Cow Way'.

Another Elmbridge connection with Caesar is found on St. George's Hill. Here there are the remains of hill fort popularly known as 'Caesar's Camp' - supposedly where his troops stayed during the battle at the Thames. However, this fort is actually Iron Age in date, and despite archaeological excavations no evidence has been found to support the claim that Caesar stayed there.

Julius Caesar was born into an ancient patrician family called the 'Julii'. At this time Rome was a Republic, governed by the Senate and elected politicians. Caesar's fame arises from his role in setting Rome on the path to becoming an Empire. However, contrary to popular belief, Caesar was never an 'Emperor' - this title was created by his successor, Augustus.

Caesar began his political career in the traditional style, rising up the ladder of political positions know as the 'cursus honorum'. In 59 BC Caesar achieved the position of Consul - this was the highest elected role, rather like Prime Minister. Soon after Caesar sought an alliance with Pompey and Crassus to form what is now known as the First Triumvirate (rule of three men). His revolutionary policies upset the traditionally conservative Senate, who became desperate to prosecute him. He used aggression to become appointed Governor of Gaul in 58 BC, thereby adding the whole of modern France and Belgium to the Roman Empire, ensuring Rome's safety from Gallic invasions and gaining great devotion from his troops. Here he stayed for eight years and during this time led two expeditions to Britain, in 55 and 54 BC.

At the end of his Governorship, Caesar feared prosecution by the Senate and refused to disarm. Instead he crossed the Rubicon (the stream marking the boundary of his province), invaded Rome and declared war on the Senate. Civil war ensued along with his defeat of his senatorial enemies and a famous affair with Cleopatra. Caesar made himself both consul and dictator of Rome; 'the dictatorship had always been a strictly temporary position, but in 44 Caesar took it for life' (Call of the Wild, 2009). This great power allowed him to: carry out greatly needed reform; build the Forum Iulium; enlarge the senate; relieve debt, and revise the calendar.

However his dictatorship was not to last long. On the 15th ("Ides") of March, Caesar was assassinated in dramatic fashion - a large group of his conservative enemies struck him 23 times with daggers on the steps of Pompey's Theatre in Rome. A final 14 years of Civil War followed that eventually ended the Republic and established Caesar's nephew, Octavian, as 'Augustus', the first emperor of the Roman Empire.

'It is said that he was tall, of a fair complexion, round limbed, rather full faced, with eyes black and piercing; and that he enjoyed excellent health, except towards the close of his life, when he was subject to sudden fainting-fits, and disturbance in his sleep. He was likewise twice seized with the falling sickness while engaged in active service. He was so nice in the care of his person, that he not only kept the hair of his head closely cut and had his face smoothly shaved, but even caused the hair on other parts of the body to be plucked out by the roots, a practice for which some persons rallied him. His baldness gave him much uneasiness, having often found himself upon that account exposed to the jibes of his enemies. He therefore used to bring forward the hair from the crown of his head; and of all the honours conferred upon him by the senate and people, there was none which he either accepted or used with greater pleasure, than the right of wearing constantly a laurel crown. It is said that he was particular in his dress. For he used the Latus Clavus with fringes about the wrists, and always had it girded about him, but rather loosely.' (Suetonius - 'The Life of Julius' ch. 45)