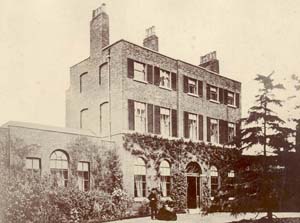 For a few months at the end of 1856 and early 1857 Leopold Redpath achieved great notoriety as the perpetrator of a fraud of almost unprecedented magnitude - some £220,000 (perhaps equivalent to about £18 million in today's money). His name appeared almost daily in national newspapers and his crimes were a source of enormous public interest.

Redpath was undoubtedly a most unusual character. His criminal activities enabled him to live in luxury but he was also a philanthropist on a grand scale. One writer summed up his nature in the following words:

"ONE of the most extraordinary instances of successful swindling, combined with a high moral reputation and a truly benevolent career, is that of Leopold Redpath. Never was money obtained with more wicked subtlety; never was it spent more charitably. A greater rogue, so far as robbery is concerned, it were difficult to find; nor a more amiable and polished benefactor to the poor and the friendless. It is certain that he spent in acts of high benevolence much of the money that he gained by robbery. With equal readiness he forged a deed or wrote a cheque for a charitable institution." [Evans, 1859]

Redpath's association with Weybridge was short-lived. Sometime in mid-1856 he purchased the freehold of Milsington House (pictured), a substantial building standing in 1¼ acres of grounds in the centre of the village opposite the parish church. The site is now occupied by Queen's Parade, which houses several shops, the Public Hall, and at the rear, Weybridge Hospital and Health Centre. Before Mr & Mrs Redpath moved in the house was redecorated throughout and furnished "in a style of great splendour". No fewer than 10 servants were engaged and remunerated at above the normal going rate. In the short time that he lived at Milsington House, Redpath's ostentatious wealth became well-known in the village. The following passage from the Surrey Comet describes his sojourn:

"WEYBRIDGE: MR LEOPOLD REDPATH. This now notorious personage resided at this place for some months past. In the Autumn of '56 he purchased a stately mansion with estate, known as 'Messelington'. The elegant edifice is situated in the centre of Weybridge, at which place he dispensed his favours with princely munificence. A few days short of his career being arrested he promised £100 to supply the poor with coals, he also offered to erect a new wall with iron palisading around the Church yard, to which Messelington is contiguous.
As he appears to have obtained his cash easily so he squandered it lavishly, as rumour states that it was Mr. Redpath's custom, if a tradesman took him a bill for 30s he would throw down two or three pounds and say he required no change, as he had not been charged enough. Indeed Mr R. seems to have been a seeker after popularity, and it is not too much to state that with the tradespeople of Weybridge he was decidedly a favourite. They are but little, if at all, sufferers by his delinquencies. Indeed the prevailing feeling among them is of great sympathy for the accused, and hopes are loudly expressed that he may escape.
He was less successful in attracting the courtesies of the Gentry. He made himself disagreeable with his meddling, and his expressed intention of setting them all to rights. He stopped up a footpath which interfered with his neighbours' rights without leave, and by his intolerable conduct deprived himself of those amenities of Society which a new-comer into a district may reasonably expect from his equals." [Surrey Comet 6 December 1856]

The footpath which was "stopped up" ran along the west side of Milsington House - it is now Minorca Road - and this matter appears in the Weybridge Vestry Minutes for 1856 [Surrey History Centre].

Leopold Redpath was born on the 12th May 1816 in Greenwich, Kent, the son of James Redpath, a poor man. His education was sufficient for him to obtain employment as a clerk, initially with a law firm. He later set up in business on his own account possibly as an insurance broker. He was unsuccessful and became bankrupt in 1840, very shortly after his marriage on 23rd Feb 1840 to Jessie Sherman (1819 - ?). Among the creditors were the wedding caterers and the supplier of furniture for the Redpaths' house in Blackheath.

At some time in the early-to-mid-1840s he gained employment as a clerk with a railway company, moving in 1846 to the recently-formed Great Northern Railway (GNR) Company as chief clerk in the registration department. Because of the way in which the company had been set up the Registrar was a solicitor with no knowledge of accountancy or bookkeeping so he was very much dependent upon Redpath for the smooth running of the department. This gave Redpath the opportunity to make false entries in the registers and this he seems to have started doing sometime in 1848. In due course Redpath succeeded to the post of Registrar so the opportunities for fraudulent activity became almost unlimited.

Although forbidden by his employers to do so, he speculated in stocks and shares with some success. His stockbroker was therefore not surprised when from time to time he sold GNR stocks. These were in fact spurious but indistinguishable from legitimate stocks and were subsequently purchased by bona fide investors. By mid-1853 his financial "dealings" had become so successful that the Redpaths were able to take up residence at a fashionable address: 27 Chester Terrace, Regents Park, one of the elegant Nash terraces overlooking the park itself. There they entertained guests in lavish style.

To all outward appearances he was the model of a successful business man and he gave liberally to charity. He was described as "a gentleman of reputed unblemished honour, a large subscriber to public charities, a governor of Christ's Hospital and St. Anne's Society." Indeed it was said that his name appeared on every charitable subscription list. He seems to have enjoyed his reputation as a philanthropist.
By the autumn of 1856 the directors of the GNR found they were paying some £5000 more in dividends than their authorised capital would seem to warrant. At about the same time they became aware of the amazing extravagance of Redpath's lifestyle and set in train an examination of the stock registers whereupon the frauds were soon revealed. Redpath stood trial at the Old Bailey on 16 January 1857, was found guilty and sentenced to transportation for life. After a period in Newgate he was placed aboard the ship Edwin Fox which sailed from Plymouth on 26th August 1858 with 280 convicts and 82 passengers. After an 86-day voyage the Edwin Fox reached Fremantle, Western Australia, on 20th November 1858.

After several years at the Swan River Penal Colony, Redpath received a conditional pardon on 7 February 1868. He was then a free man except that he could not leave Australia. Whether he managed to build a new life, perhaps living honestly, is not known but he is reported to have died on 1st May 1891 in St Vincent's Hospital, Sydney, and he was buried on 3 May 1891 in Rookwood cemetery, Sydney, Australia.