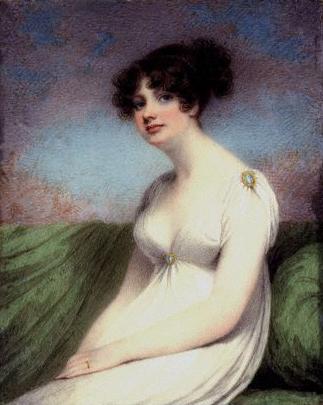 Mary Ann Clarke [née Thompson] (1776-1852) a courtesan who became mistress of Frederick, Duke of York, from 1803 to 1806. The Duke, who lived at nearby Oatlands, set her up at Columb's House. But their affair became a political scandal when the Duke was charged with corruption for promoting officers from whom Clarke had taken bribes. Renounced by the Duke, Clarke proved politically shrewd, writing her own revealing memoirs and extracting large pensions from the government to keep them suppressed. But in 1809 the scandal forced the Duke's resignation as army commander-in-chief. Clarke was prosecuted for libel in 1813 and imprisoned for nine months. On her release from prison she went to live in France where she died in Boulogne-sur-mer in 1852.