'Dejection marked every countenance; and I think it is not too much to say, "tears gushed into every eye." ' This reflection might have been made on the death of Diana, Princess of Wales in 1997 but it was written in a Bristol newspaper on 9 November 1817 lamenting the death of Princess Charlotte, granddaughter of George III. Perhaps she was the original 'People's Princess'?

Princess Charlotte was the only child of the disastrous marriage between George, Prince of Wales (later Prince Regent and later still King George IV) and Princess Caroline of Brunswick. The Prince of Wales had only agreed to the marriage in order that Parliament would settle his debts. He considered himself 'married' to his long-term mistress Maria Fitzherbert. On seeing Caroline for the first time the Prince remarked 'I am not well pray get me a glass of brandy'. Her response was no more flattering; 'I think he is very fat and nothing like as handsome as his portrait.' The couple separated within weeks of the wedding and their daughter Charlotte Augusta was born nine months later at Carlton House, London, on 7 January 1796. The Prince announced the arrival to his mother Queen Charlotte by informing her that his wife had given birth to 'an immense girl and I assure you notwithstanding we might have wished for a boy, I receive her with all the affection possible.' Three days later believing himself to be mortally ill he made a will leaving his wealth to Mrs Fitzherbert, not to his wife and only legitimate daughter.

Princess Charlotte had a lonely and isolated childhood. She was brought up in her own household separate from those of her parents. She dined with each of them once a week but was destined to remain a pawn in their warring relationship. Princess Charlotte occasionally spent time with her royal grandparents at Windsor or Weymouth. Queen Charlotte reported that the fair, plump and boisterous Princess was well informed and 'blessed with an uncommon share of good sense.' Until she was eight Princess Charlotte was in the care of her governess the Countess of Elgin but this came to an end over a disputed invitation to the Princess and her mother from the King that went against the wishes of the Prince of Wales. Princess Charlotte was also the victim of the fractious relationship of her father and grandfather. With the resignation of the Countess of Elgin a new strict educational regime was embarked on with John Fisher, the Bishop of Exeter in control. Charlotte studied religion, Latin, history, literature, writing, drawing, music and dance. Music, literature and art seem to have been her strongest suits but her handwriting was reported to be illegible and her spelling atrocious. She lacked good manners and had a temper, once snatching off the Bishop of Exeter's wig and throwing it in the fire! Her early biographer, Robert Huish (Memoirs of her late Royal Highness, Charlotte Augusta), wrote in 1818 that '... She never qualified her opinion of persons nor of things, but spoke it boldly and without consideration.' This must partly have been a consequence of her isolated upbringing - she was simply not used to functioning in a social context. Her mother had already shown concern about this when she wrote to the King in 1813 '...She who is destined to be the sovereign of the great country enjoys none of the advantages of society deemed necessary for imparting a knowledge of mankind to persons who have infinitely less occasion to learn that important lesson.'

Charlotte's father, since 1811, Prince Regent, turned his attention to his daughter's marriage. He was aware that she was very popular with the public, something he never enjoyed. He intended to marry her to Prince William of Orange and in December 1813 she reluctantly agreed to do so but on realising that she would have to live in Holland permanently she broke off the engagement. The Prince Regent was furious; Charlotte was confined to Cranbourne Lodge in Windsor Forest where she was allowed only to see Queen Charlotte. Shortly afterwards her mother left Britain and this somewhat eased relations between Charlotte and her father. She never saw her mother again.

By 1815 Charlotte was trying to persuade her father to allow her to marry Prince Leopold of Saxe-Coburg and Gotha (1790-1865). She had met this impoverished prince some years earlier and had maintained a correspondence with him. Having talked to the young man the Prince Regent concluded that 'he had every qualification to make a woman happy.' Charlotte was ecstatic 'A Princess never, I believe, set out in life (or married) with such prospects of happiness, real domestic ones, like other people.' They were married on 2 May 1816. Just as for the wedding of Prince Charles and Lady Diana Spencer on 29 July 1981 vast crowds lined London's streets; such was the congestion that both Charlotte and Leopold arrived late at the wedding venue. The honeymoon was spent at the Duke of York's residence, Oatlands Park, near Weybridge. 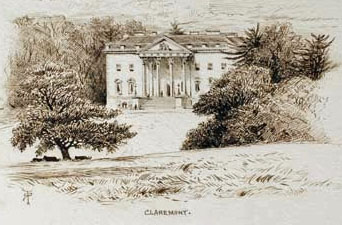 Within two days of their marriage the couple had visited Claremont in Esher and decided that they had found their home. On 20 June 1816 a bill passed through Parliament confirming the purchase of Claremont and a park of 200 acres as a gift to the royal couple from the nation. On 23 August 1816 the couple drove through a triumphal arch erected from the Bear to Napper's Corner and took up residence at their new home. Prince Leopold was at pains to protect their privacy; they lived as quietly as possible with occasional forays to the theatre and opera. To calm the more exuberant side of his wife's character the Prince would often whisper to her 'Doucement, ma cherie' (Gently, my love) - 'Doucement' became her nick-name for him.

Princess Charlotte enjoyed running her household personally; she chose her tradesman locally and often used those who would benefit most from her patronage. In contrast to most of her family she took pride in paying her bills promptly. They strolled in the gardens and planned to build a summerhouse on a terrace with a view over the lake. The evenings, after dinner, were spent in the drawing room, which was decorated with yellow silk especially sourced from Spitalfields to help sustain the silk industry there. Charlotte liked to promote all things British, including Worcester china. Huish wrote '.... her Royal Highness constantly remarked, that she beheld ingenuity sufficient in her own country to satisfy the most scrupulous taste....'. Charlotte's 21st birthday in 1817 was celebrated with much gusto in Esher; local tradesmen tried to outdo each other in the magnificence of their decorations, a band, playing patriotic music paraded through the streets for the whole evening, the 'surrounding poor' were given £100 by the royal couple, Claremont was illuminated and a musical evening held there for Charlotte's guests. Typically, the Prince Regent hosted an extravagant celebration at Brighton Pavilion to celebrate the same occasion. Her interest in the local community extended beyond the well-being of the tradesmen to a small village school (probably a dame school) which she visited often on her walks and delighted in checking the children's work and handing out merit awards. On one of her last visits before the anticipated birth of her child she urged the pupils to behave well and to work hard so that she could reward them by introducing them to the new Prince or Princess.

News of Charlotte's pregnancy was made public in April 1817. Having already suffered at least one miscarriage she led a very quiet life throughout the summer. It was thought that she would give birth on or around 19 October. Baby clothes were purchased, a wet nurse engaged and her physician Sir Richard Croft moved into Claremont a few weeks before the expected birth. The Princess took to her room in the late afternoon of 3 November and after a labour lasting fifty hours gave birth to a 9lbs stillborn boy on 6 November. The child had been in a breech position. She died in the early hours of 7 November most likely as a result of haemorrhaging and shock.

'November, 1817, saw the ruin of this happy home, and the destruction, at one blow of every hope and happiness.' Prince Leopold wrote this to his niece Queen Victoria when he was almost seventy. Charlotte's death had a devastating impact on all those close to her. Her father was prostrate with grief and unable to attend the funeral at St. George's Chapel, Windsor on 19 November. Her mother, Princess Caroline, heard the news as passing gossip and fainted with shock and grief. Despite the reassurances of the Prince Regent and Prince Leopold, Sir Richard Croft could not rid himself of a sense of overwhelming responsibility for her death and in February 1818 killed himself. Many believed he should have taken a more interventionist approach to the Princess's labour.

The country was plunged into the deepest mourning. Local newspapers, as reported in The Times (11 November), recorded widespread grief: '.... an event, than which we can conceive of nothing more afflicting to the people of England.' (Hull); '....every soul was struck with dismay and consternation...' (Dover) and in Brighton they lamented that the death of Princess Charlotte, '......has caused a sensation in this town too deep and too heartfelt for words to describe....' These expressions of grief are resonant of the reaction to the death of Diana, Princess of Wales one hundred and eighty years later.

With Charlotte's demise George III had no legitimate grandchildren so his fourth son Edward, Duke of Kent was pressed to marry. He acquiesced and married Prince Leopold's widowed sister, Victoria. Their daughter, also named Victoria, enjoyed part of her childhood at Claremont and went on to reign from 1837 to 1901. Had Charlotte or her son lived Queen Victoria may never have been born and Charlotte would have inherited the throne on the death of her father, George IV, in 1830. Prince Leopold was elected King of the Belgians in 1831and he encouraged the marriage of his niece Victoria to Albert of Saxe-Coburg and Gotha (1840); he became one of their trusted advisers. Princess Charlotte's brief life was often troubled but she came to know personal happiness and the adoration and affection of the British people. The monument on the tomb of Charlotte and her son was paid for by public subscription.