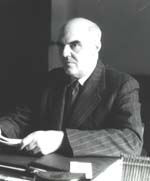 Rex [Reginald Kirshaw] Pierson (1891-1948) aircraft designer and engineer, he became a technician with the newly formed Vickers aviation department in 1911 and two years later learned to fly at the Vickers Flying School at Brooklands. As chief technician he built the design team at Weybridge through the inter-war years from about two-dozen to more than five-hundred at the end of the Second World War. His commercial adaptation of the Wellington bomber into the Viking was first flown on 22nd June 1945, just six weeks after the end of the war in Europe, becoming Britain's first post-war airliner.