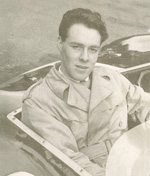 © Image courtsey of the Jankel family

A motor-car prodigy, Jankel built his first car at the age of sixteen. In 1972 he set up a company in his garage, restoring vintage cars. It was called 'Panther Westwinds', in homage to Jaguar and his home in Weybridge.

The company soon expanded to a factory in Byfleet. Panther cars attracted an A-list clientele - they were sumptuous, expensive and sometimes pure fantasy. The 'Panther Six' had four wheels at the front and a top speed of 200 mph. Only two were ever made. Other cars included the J72 and the Panther Deville.

In 1967 Jankel and his family helped found the North West Surrey Synagogue. He devoted much time to advising and designing aspects of the building. The Synagogue has since grown to a large and thriving community based in Oatlands.