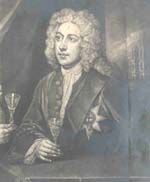 Sir Henry Clinton, (1730-1795), army officer, served with great distinction in the Seven Years' War and the American War of Independence. In winter 1777-8 Clinton became Commander-in-Chief of British forces in America. But the insubordination and surrender of his second in command, Charles Earl Cornwallis, effectively ended the American war, Clinton's command, and his active military service. He returned to England in June 1782. Clinton married Harriet Carter (1747-1772) on 12th February 1767. But on 29 August 1772 his wife died after giving birth to her 5th child in 5 years. Clinton was grief stricken by Harriet's death, and her parents and two sisters moved into his house in Weybridge to care for his children.