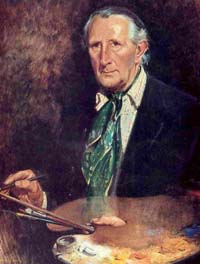 © Reproduced with kind permission from the Cuneo Estate

The artist and illustrator Terence Cuneo (1907-1996) was born in London on 1st November, 1907. His parents, Cyrus and Nell, were both artists, and had studied under James Whistler in Paris. Terence Cuneo boarded at Sutton Valence School near Maidstone, and spent a great deal of his youth at St Ives in Cornwall. Later, he studied at the Chelsea and Slade schools of art, and then began illustrating books and magazines. During the 1930s, he was prolific, especially in illustrating boys' and girls' books, including the Champion Annual for Boys and the Greyfriars Annuals.

During the second World War, he served in the Royal Corps of Signals and Royal Engineers where his talents were used making drawings of enemy positions, and in the preparations for D-Day. He also worked for the Ministry of Information depicting conditions in occupied Europe, which can now be seen in the National Archives at Kew. He contributed regularly to the London Illustrated News and Picture Post, especially during the war years. His illustrations can also be found in John Bull, The Strand, Wide World Magazine and Good Housekeeping, to name but a few.

However, it is for his vibrant paintings depicting the social and civic life of Britain that he is most famous. Cuneo's paintings record a vast diversity of subjects, including the railways, rural and industrial scenes, official engagements, military and ceremonial events, equestrian and wildlife scenes, as well as portraiture. After the end of the war, he received his first commission from the London and North Eastern Railway to paint the poster Giants Refreshed. Many other railway posters followed, as well as commissions on a huge variety of subjects. His particular enjoyment in painting transport scenes is shown by the great number of pictures of railway engines, cars, tractors, aeroplanes, ships that he produced.

His fame was assured in 1953 when he was invited to paint the scene of the coronation of our present Queen at Westminster Abbey. This painting now hangs in Buckingham Palace. He painted the Queen in sixteen other commissions, and was highly honoured when Her Majesty commissioned him to paint a picture for her private collection.

He declared that his aim was that people should enjoy his work as much as he had done in creating it.

Since 1953, all of his paintings contained his little friend, a mouse, who can be found, sometimes after a long search, tucked into some appropriate place. In 1977, he published an autobiography called 'The Mouse and his Master'. There are four major books of his work, together with numerous other publications.

He was appointed OBE and CVO, and was granted the Freedom of the City of London in 1993. A large bronze memorial statue of Terence Cuneo by Philip Jackson stands on the concourse of Waterloo Station, which was unveiled by Her Royal Highness Princess Anne in October, 2004.

The centenary of the birth of Cuneo was celebrated in 2007 with many events and exhibitions. During the centenary year his painting of Waterloo Station, which was his largest canvas, measuring 20ft by 10ft, was hung in the National Railway Museum at York, where it remains. 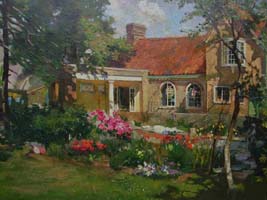 © Reproduced with kind permission from the Cuneo Estate

In 1934, Cuneo married Catherine Monro and from 1940 they lived in Ember Lane, East Molesey. He had two daughters, Carole and Linda, and three grandchildren, Andrew, Melanie, and Cindy. He was a well-known figure in the neighbourhood, contributing to its cultural life and bringing many famous figures to the area, including Prince Philip. He was President of the Molesey Arts Society, and the Thames Valley Art Society.

On 3rd January 1996, Terence Cueno died at Arbrook House, a nursing home in Esher where he had spent some time. His daughter Carole was beside him.

A plaque commemorating Terence Tenison Cuneo has now been unveiled outside 205 Ember Lane, East Molesey, close to where he lived from 1940 until shortly before his death in 1996.