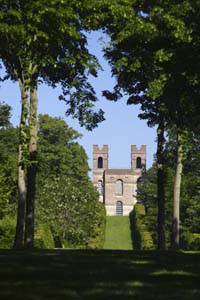 Sir John Vanbrugh (architect of Blenheim Palace and Castle Howard) built the first house on the Claremont estate in 1708. This house stood in front of the current building and was bought by Thomas Pelham-Holles in 1714, the same year in which George I raised him to the peerage, bestowing the titles of Viscount Houghton and Earl of Clare on him. The new owner commissioned Sir John Vanbrugh to add two great wings to the house, as well as a tower on a nearby knoll from which he and his guests could enjoy views of Surrey - his 'prospect house' or Belvedere. Two lodges were also added at the Copsem Lane end entrance.

Thomas Pelham-Holles initially named his Surrey estate 'Clare-mount' but it was later shortened to 'Claremont'. It was his largest and favourite home. He relished holding lavish entertainments at Claremont but serious political business was also conducted there. For example on 30th June 1765, he successfully persuaded his Whig party to accept George III's offer to form a new government in which Newcastle served as Lord Privy Seal and had special responsibility for ecclesiastical affairs.

Newcastle spent much time at Claremont during his final years; he took considerable pride in his splendid house and landscaped gardens on which he had spent a fortune. In 1726 the gardens, which included a turf amphitheatre, were described as ' the noblest in Europe'. When Newcastle died in 1768, his widow sold Claremont to Lord Robert Clive because of the huge debt she had inherited. Lord Clive demolished Newcastle's house and commissioned Lancelot 'Capability' Brown to build another on a higher and dryer site. This Palladian mansion remains and now houses Claremont Fan Court School. The gardens are owned and run by the National Trust. 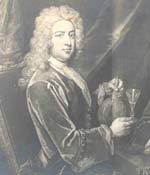 Thomas Pelham was born in London on 21st July 1693; he was the eldest son of his father the first Baron (Thomas) Pelham (c.1653-1712) with his second wife, Lady Grace Holles (d.1700). He was educated at Westminster School and Clare College, Cambridge, although he left without a degree (this was not unusual for a young man of his class at the time). With the deaths of his maternal uncle in 1711 and his father the following year Thomas Pelham added Holles to his name (a condition of his uncle's will), and acquired the following titles: Duke of Newcastle upon Tyne and Baron Pelham of Laughton, Sussex. He also became extremely wealthy with an annual income of almost £32,000 and very powerful, influencing the selection of over twelve MPs from Nottinghamshire, Yorkshire and Sussex. In 1714, the Duke of Newcastle took his seat, aged twenty-one, in the House of Lords and began a political career that would last until he resigned his last great office of state in 1766. His career coincided with the 'Whig Supremacy' - he was a stalwart supporter of that party and of the Hanoverian monarchs and just as fervently opposed to the Stuart-supporting Jacobites. In 1717 the Newcastle married Lady Henrietta Goldolphin (d.1776), a descendant of John Churchill, first Duke of Marlborough. The couple did not have children but it seems to have been a happy marriage - the Duke of Newcastle wrote to his wife every day when they were apart.

Newcastle's rise to political power was swift; by 1722 he was the third most influential minister in the kingdom and by 1724 as Secretary of State for the Southern Department with Viscount Townshend as Secretary of State for the Northern Department was jointly responsible for Britain's foreign policy. When George I died in 1727 the triumvirate of Robert Walpole, Viscount Townshend and the Duke of Newcastle convinced George II of their worth. Newcastle adhered when possible to the 'old system' of Britain and Austria being united against France, and as the minister responsible for relations with Spain he favoured taking a hard line with that country in order to protect Gibraltar and British shipping in American waters. This stance was justified when, after the Austrian alliance fell apart, Spain ceased its badgering of Gibraltar and conceded almost all the matters under dispute with Britain by the Treaty of Seville, 1729. Viscount Townshend had disagreed with Newcastle's position and was replaced with Lord Harrington who would be more compliant. Newcastle was now the second minister in the realm and the government's chief spokesman in the House of Lords. A key triumph was achieved by the conclusion of the Treaty of Vienna in 1731 when Austria agreed to cease contesting Britain's commercial pre-eminence in Asian waters. Throughout the 1730s Newcastle expanded his influence and power by being able to have a say over Scottish affairs, being able to to make appointments in the American colonies and after 1736 he extended his influence to the affairs of the Church of England. He was truly at the heart of government.

When war with Spain broke out in 1739 (over claims to certain rights in America) Newcastle, was to all intents and purposes Defence as well as Foreign Minister. This conflict became secondary when Britain supported Austria against France and Prussia (later changed sides) in the War of Austrian Succession, 1741-48. From1744 Newcastle's younger brother Henry Pelham had joined him and Lord Harrington as the key drivers of national policy. The war was concluded by the Treaty of Aix-la-Chapelle, 1748. The pre-war status quo was maintained so Newcastle could claim that at the very least the country had not lost. However, the issues between Britain and France in America had not been solved so another war could not be ruled out. Henry Pelham became Prime Minister in 1748 and Newcastle had complete control of foreign policy for most of his brother's premiership. He set out to isolate France but this was difficult to achieve. Henry Pelham died in March 1754 and Newcastle became Prime Minister for the next two years.

His foreign policy during this time was not successful. Newcastle managed to splinter old alliances; he alienated both Prussia and Russia and saw an end to the Hapsburg-Bourbon hostility when Austria and France formed an alliance in 1756, soon to be joined by Russia. In May 1756 Britain declared war on France and a month later Minorca was lost to the French. The dreaded European conflict (the Seven Years War, 1756-63) began in August when in order to strike against the new Austro-French concord the Prussians invaded Saxony. Newcastle resigned as Prime Minister in November 1756 but returned to the office in June 1757 and held the premiership until May,1762. He played an important role in the successful prosecution of the war, which helped lay the foundations of Britain as an imperial and world power.

George II died unexpectedly in 1760 and was succeeded by George III. The new monarch relied heavily on his former tutor, the Earl of Bute, with whom Newcastle disagreed in early 1762 over Britain's subsidy to Prussia. In May of that year the Duke of Newcastle unwillingly resigned. He was unused to being out of power and when a new Whig administration was formed under the marquess of Rockingham in 1765 he became Lord Privy Seal with special responsibilities for ecclesiastical affairs. The new ministry was plagued with problems and internal divisions and on 30th July 1766 Newcastle, again refusing a pension, resigned his final major office. He died at his London home on 17 November 1768 having been weakened by a stroke some months before.

Judgement of the Duke of Newcastle's political career is mixed. Many believe he was a better second-in-command than leader. Too often he seems to have espoused poor ideas, for example, urging Britain to go to war in 1733. Yet he was an astute operator of the party machine and wielded his patronage effectively. Newcastle was also diligent, orderly, honest and definitely not acquisitive - by 1762, his annual income had fallen to £9,000. In his own words he tried to do what he thought was best for his country:

I shall not...think the demands of the people a rule of conduct, nor
shall I ever fear to incur their resentment in the prosecution of
their interest. I shall never flatter their passions to obtain their
favour, or gratify their revenge for fear of contempt.
(cited on Number 10 Downing Street website)

Harriet Pelham-Holles, Duchess of Newcastle-upon-Tyne and wife of Thomas Pelham-Holles. Daughter of Lord Godolphin and the granddaughter of the Duke of Marlborough. Until her marriage she was known as Lady Harriet Godolphin. Like her husband she was a devoted Whig and Hannoverian supporter. They married in April 1717, and from the 1720s they became famous for throwing lavish parties, attended even by her husband's political opponents.