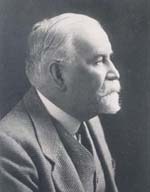 W.G. [Walter George] Tarrant (1875-1942) builder and property developer. Tarrant bought nine hundred and sixty-four acres of land on St George's Hill from the Egerton family. Towards the end of the First World War, Tarrant built a giant wooden-framed triplane, called the Tarrant Tabor, 73' 3" long, with a wingspan of 131' 3", and an overall height of 37' 3", which was designed to bomb Berlin. The wings and fuselage were built at Brooklands and towed to the Royal Aircraft Establishment at Farnborough, where the aeroplane was assembled, but it crashed on its first flight on 26th May 1919, killing both pilots.